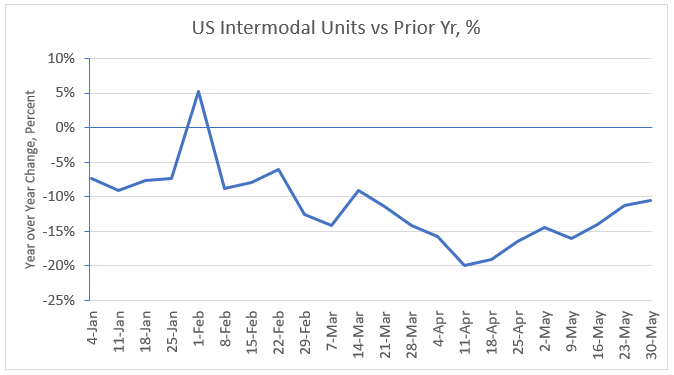 April port import container volumes recovered somewhat from March but remained quite mixed. On the Pacific Coast, the Canadian ports shifted up to positive import comparisons versus the year-earlier month. The US ports improved from March but were still generally negative against the prior-year month, if one considers LA and LB together. Exports from US ports were still down in the 16-18% range versus prior year, except for Oakland which notched a small gain. The Canadian ports also saw mixed exports in April versus the prior year, though a much stronger performance than in March. Prince Rupert fared better than other Pacific Coast ports, albeit off a smaller volume base, with its service orientation including North China and Korea in addition to South China.

On the Gulf and East Coasts, April import volumes were less negative than in March against the year-earlier month. This coincided with the recovery of Chinese manufacturing. Baltimore actually experienced a slight upswing in import TEUs. On the export side, all the Gulf and Atlantic ports we cover posted loaded volumes lower than in the year-earlier period, most in the 10-30% lower range. 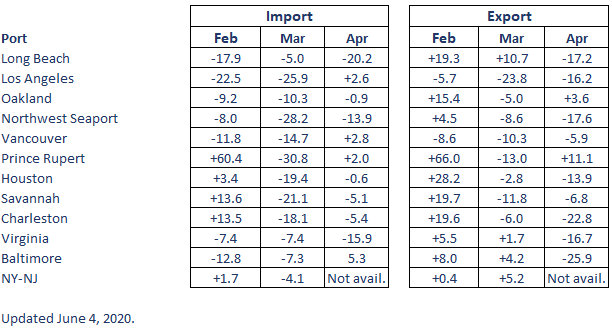 Meanwhile, ports continue to invest in service improvements. At Savannah, the Georgia Ports Authority (GPA) has reached the halfway mark in a $218 million project to double capacity at the on-dock intermodal rail yard. The project targets Chicago and Memphis markets, as well as cities in Kentucky and Ohio. A full day will be cut from transit times, so that containers can reach Chicago within three days of discharge from ship. The goal is to compete with the ports of Los Angeles and Long Beach in serving these inland markets. The first Norfolk Southern trains will start from the new yard in a few months. Even with the enhanced capabilities, GPA expects that intermodal moves (currently about 20% of total loads) would not exceed 25% of volume.

Baltimore also announced, in late May, faster intermodal dwell times and transits to the Midwest. The Norfolk Southern moved from an off-site yard into the Port of Baltimore’s on-terminal yard, eliminating the former four-mile dray. Norfolk Southern thus joins the CSX, which has used the on-terminal yard since 1988. The overall aim is to expand the port’s intermodal share, currently less than 5 percent of container traffic; but significant further progress is still several years away. Funding was secured in December for a $466 million project to remove a major constraint at the port by enlarging the Howard Street Tunnel to permit double-stacked CSX and NS trains. Project completion is expected by 2024.

Ocean carriers continue to aggressively cancel sailings during this crisis, with capacity down 15% year-over-year in May. And Maersk, in its mid-May earnings call, stressed preserving profitability rather than growing market share. Blanked sailings and low oil prices have helped carriers weather the storm. The lower capacity offered has kept freight rates stable; Transpac spot rates are even higher than in 2019.

Blanked sailings, however, have compounded shippers’ supply chain woes. Tangled communications have led cargo owners to double-book space and, in the frenzy, to omit notifying carriers of booking cancellations. Detention and demurrage charges have increased for many shippers, as cargo is held at overseas or US ports, waiting for stores to reopen. Canceled sailings cannot ensure carrier financial health, given the large revenue declines still expected. International trade volumes are expected to decline by 10% in 2020, according to a May 20th IHS Markit forecast. One carrier, Singapore-based Pacific International Lines, warned last week of likely loan and bond defaults.

The movement of containers by US railroads was down by 11.2% in the week ending May 23, and by 10.6% in the holiday-shortened week ended May 30, versus the prior-year weeks. From its nadir in mid-April, when volumes were down by 20% from the corresponding week a year earlier, this represents a significant and welcome turnaround.

In addition, 15 of 20 carload commodity categories tracked by the AAR had higher loadings in the week ending May 23 than in the previous week. And on a year-over-year basis, improvements continued in the shortened week ending May 30. Carloads of motor vehicles and parts, for example, are still far below prior-year levels but were more than triple the number of units originated just three weeks earlier.

Trucking activity is generally recovering, as of late May, from its lows in April. The situation also continues to vary substantially by region (see trucking activity map by Geotab below). 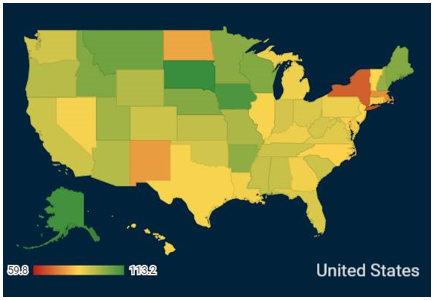 By region, the Northeast continues to be the hardest-hit area. Parts of the Midwest and Mountain region is experiencing volumes higher than pre-pandemic levels. These comparisons, however, are not seasonally adjusted – so an increase reflects both seasonal expansion as well as recovery from lockdowns.

Truckload spot rates have also begun to recover, across all equipment types, from the low levels reached in April. Businesses continue to reopen as states lift lockdown restrictions. Activity is picking up in the Southeast and Midwest, as of late-May, according to DAT’s Market Conditions Index for May 25-31, 2020. At least for now, the truck driver shortage is not an issue, due to lower freight volumes and the apparent lack of any severe Covid-19 outbreak among truckers.

The coronavirus pandemic exposed vulnerability in many global supply chains. Companies now face an urgent opportunity to reconsider the balance between supply assurance and low cost. Now is the time, we believe, to de-risk the supply chain and raise resilience.

Ten tactics for companies to consider are:

Importers seeking to diversify sourcing away from China will affect the relative advantage of US port gateways. Ships can sail efficiently from North Asia origins such as Shanghai, Korea and Japan directly to the US West Coast and to East Coast ports via the Panama Canal. For origins from Hong Kong south – including, for example, Vietnam, Singapore, Indonesia and the Indian Subcontinent – the shorter route to the East Coast transits via the Suez Canal. This means that if sourcing shifts to the south, the US East Coast will be increasingly favored. And ports like New York, closer to the Mediterranean, may gain volume to the Midwest at the expense of southern ports such as Savannah.

Import demand for US ports also is fundamentally driven, however, by consumption growth patterns. The period of rapid growth in California, from 1940 to 2000, benefited the West Coast ports. More recently, though, California’s population growth rate has slowed. The Mountain states have grown faster. Florida, the Southeast and Texas have seen strong population expansion. The Northeast and the Midwest lag behind in the latest annual figures (for 2017-18). 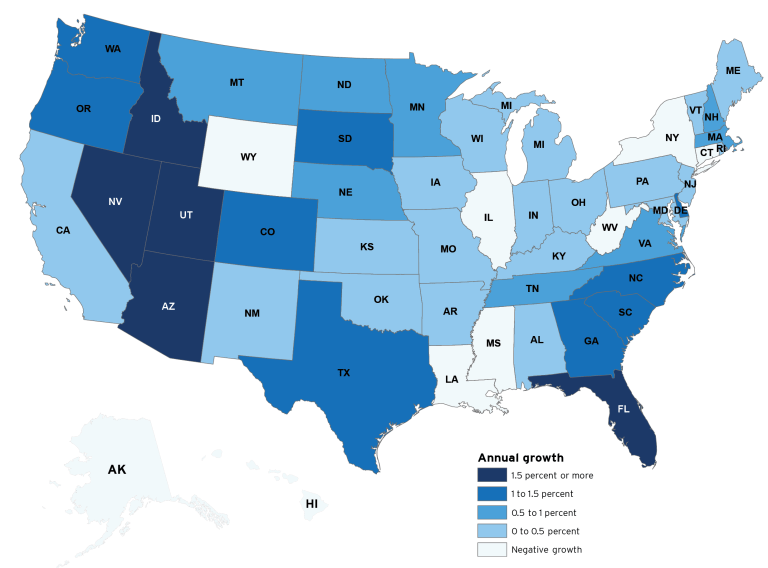 The fortunes of various port gateways are determined by a wide range of factors. We plan to explore other drivers of future US and Canadian container port traffic in future editions of these Ports & Intermodal Insights. Stay tuned for further updates.

Contact us to explore how we can support your strategic, operational and investment needs: info@newharborllc.com.