Manufacturing in Mexico to supply the U.S. market remains robust. Mexico offers lower unit production costs compared to both the U.S. and China and has strong logistical and global trade advantages that make it an attractive locale to open or expand production facilities supplying the U.S., the Americas, and the world. Despite these facts, several myths have emerged over the years, which serve to obscure the continuing progress of Mexican manufacturing. Four of these myths are debunked here.

Myth 1: Mexico is losing out to a resurgence of U.S. manufacturing “reshoring”

The reality is that Mexican-made products continue to gain ground in the U.S. market. This trend is revealed by applying the Reshoring Index and Import Ratio1 to manufactured goods imports from Mexico (Figure 1). There has been a consistent trend of net offshoring to Mexico (blue line below), over the past dozen years, and a corresponding rise in U.S. imports from Mexico relative to U.S. domestic output (from 2.8% to 4.4%, over 2003-2015; orange line below). As noted in a related New Harbor Consultants Brief, “Reshoring vs. Offshoring: The Exchange Rate Effect,” there is also a similar continuation of net offshoring of U.S. manufacturing to Asia. 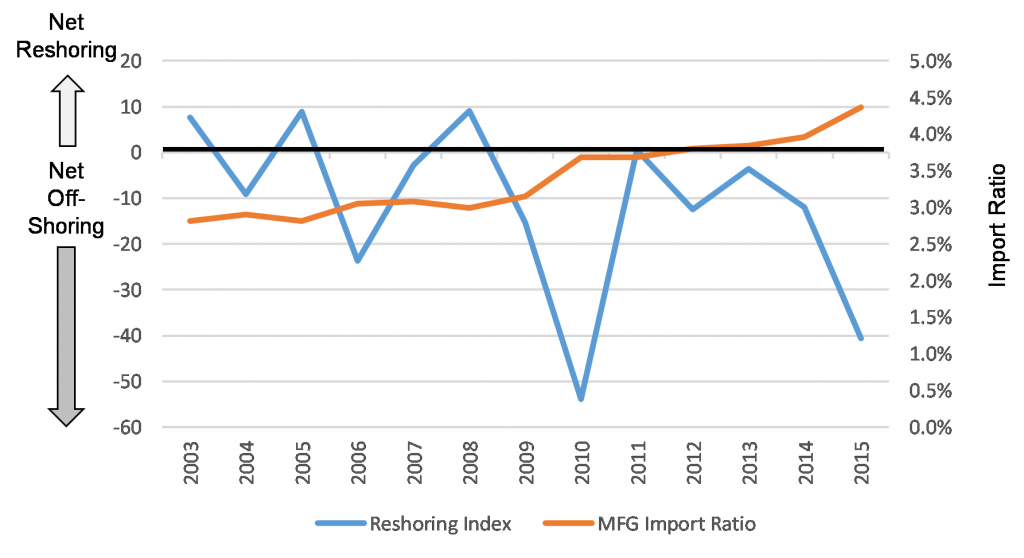 Mexico continues to benefit from its close proximity to the U.S. and from NAFTA, along with other free trade agreements spanning a total of 45 countries and almost 60% of the world GDP. Hence, Mexico remains an attractive production base for U.S. and global companies to supply U.S. and Mexican markets, as well for export globally. This advantage has been especially notable for automobile and electronic manufacturers. In recent years, Audi, BMW, Fiat, Ford, GM, Kia, Nissan, Toyota, and VW have all announced or opened new plants or major expansions in Mexico, often at the expense of U.S. investments. Leading contract manufacturer Flex increased Mexico’s share of its global net property and equipment by 3 percentage points, from FY14 to FY15, while reducing China’s share by 4 points and the U.S. share by one point.

Mexico’s attractiveness as a production base rests on underlying labor cost and productivity advantages. These have improved recently relative to the U.S., particularly since 2012, according to research by Oxford Economics. The current (2016) situation is a sharp reversal from 2003, when Chinese unit labor costs were less than half the U.S. level and Mexican costs were on par with the U.S. The availability of highly skilled labor in Mexico is an advantage cited by manufacturers.

Myth 2: Mexico is falling further behind China as a manufacturing base for U.S. markets

Mexico’s relative competitiveness with China, as a source for U.S. markets, has also received a boost from challenges in China. In recent years, China’s manufacturing wages have been rising absolutely and relative to increases in its productivity. Labor unrest has burst out across China, a phenomenon formerly unknown in the country. This has prompted shifts in manufacturing out of China to low-wage Southeast Asian nations and, for more sophisticated products, to Mexico (for further insights, see the New Harbor Consultants Brief, “Vietnam in the Trans-Pacific Partnership: Trip Report”).

Even China-based manufacturers recognize Mexico’s comparative advantages. For example, Hisense, the world’s third-largest TV manufacturer in units, is growing its production capacity in Mexico to supply the North American market. 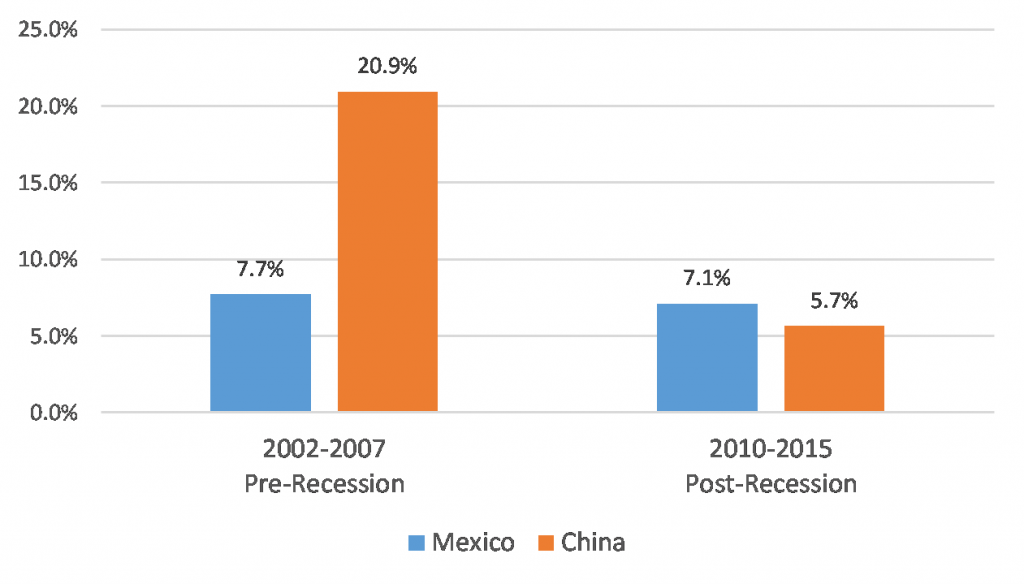 Although the majority of Mexican manufactured goods imports arrive in the U.S. via truck, intermodal rail volumes are growing rapidly (Figure 4). Between 2010 and 2015, rail container imports from Mexico have grown on average by 8.7% per year, more than twice the rate of truck (4.3% per year) flows. Intermodal’s share has increased from 9% to 11% of combined truck plus rail container import volumes, from 2010 to 2015. Rail is particularly active at the Laredo, Eagle Pass and El Paso crossings in Texas (Figure 5). 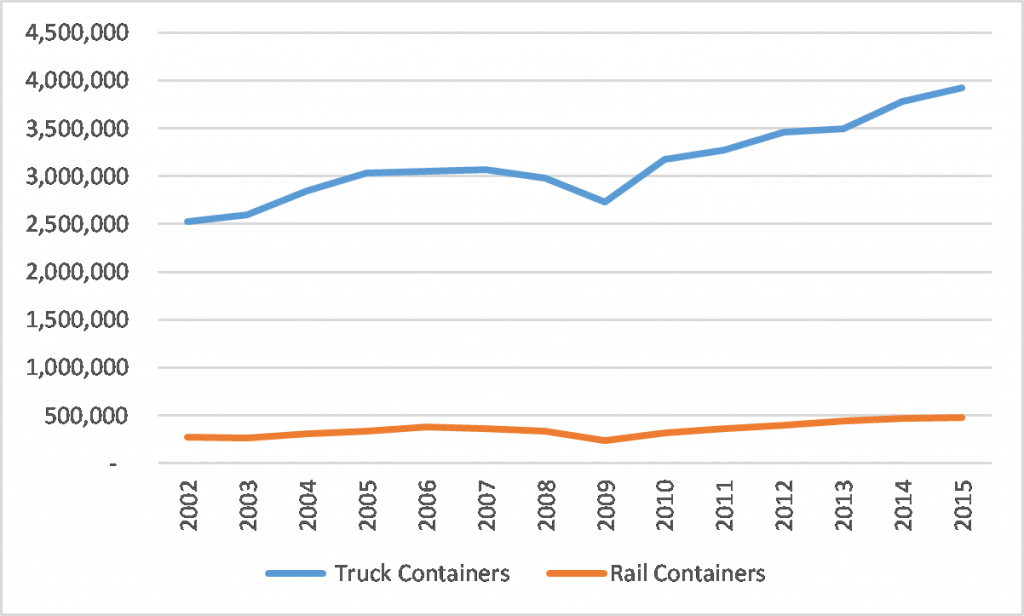 While there can be substantial northbound vehicle congestion, border crossing times for commercial trucks average less than one hour at the two Laredo bridges (Figure 6), the largest port of entry. Moreover, truckers can proactively schedule crossings to coincide with low or no-wait time periods by utilizing historical data and consulting the hourly updates on the CBP Border Wait Times website.

Compare this to port truck visit times (queuing and in terminal) of 100 minutes or more at the Ports of Los Angeles and Long Beach, or to weeks in transit for imports from Asia. Indeed, companies shifting production to Mexico often cite the benefit of reduced cycle times as part of their decision. For example, United Technologies recently noted that a shift to Mexico manufacturing would bring it closer to its key customers and its supplier base which has also migrated to Mexico.

Myth 4: Cargo theft and drug-linked crime are show-stoppers for increased nearshoring to Mexico

Mexico’s cargo theft and crime problems remain top concerns for U.S. companies relocating production to Mexico. The “severe” nature of the cargo theft problem, as assessed by FreightWatch International, warrants significant precautions and public-private engagement to protect personnel and products. However, these issues (which have not prevented accelerated nearshoring to Mexico) seem to represent potholes along the road to further Mexican manufacturing growth, rather than roadblocks.

An estimated 5,000 cargo theft incidents occur each year in Mexico. In 2015, cargo theft losses totaled about $950 million, excluding the consequential human impact (most thefts involving hijackings) and the customer service and related financial losses that ripple through the supply chain resulting from each occurrence. But relative to the size of the Mexican economy ($1.3 trillion) and its global trade (imports plus exports of $776B) in 2015, this risk is not a show-stopper.

While rail traffic is not free from theft, its loss risk profile is lower than with truck cargo. Rail intermodal services into the U.S. from Mexico have improved and have become more attractive from both service and cost perspectives. While truck transit times from Mexican manufacturing zones to destinations in the U.S., even with the border congestion and dray delays, are often shorter than intermodal, there can be considerable cost and cargo security advantages to using intermodal services for imports from Mexico (Figure 7). 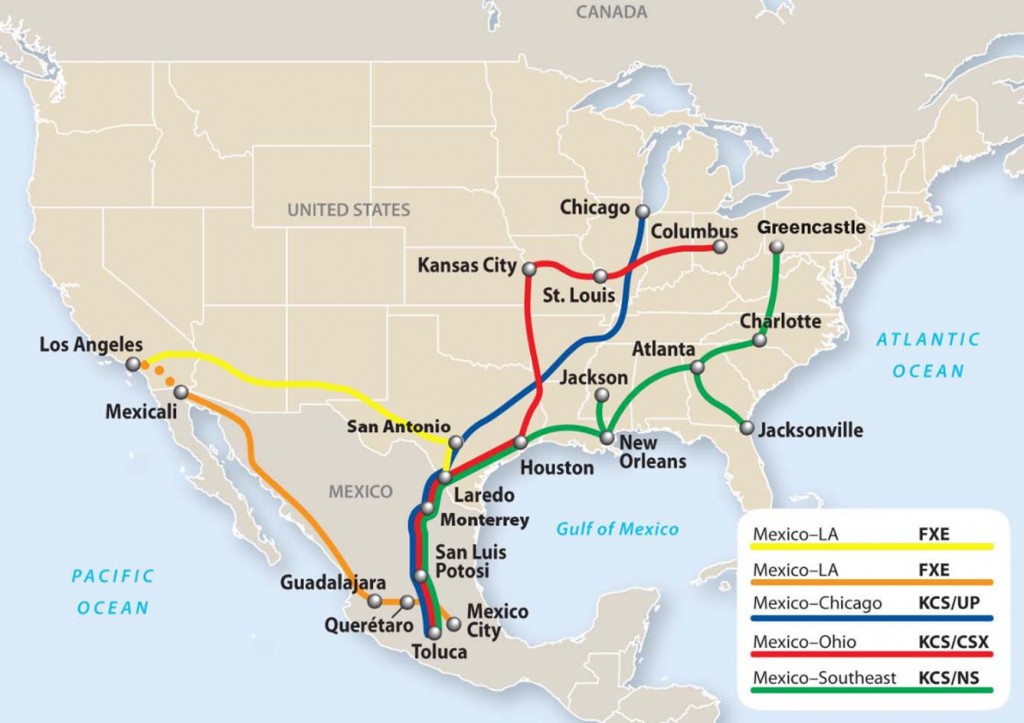 Intermodal also offers an improvement in security compared to over-the-road truck: Limited stoppages en route and at the border, with double stacking as further theft deterrent. This helps to explain the strong growth in intermodal volumes mentioned earlier.

In light of the reality rather than the myths, nearshoring of manufacturing to Mexico will likely remain competitively attractive to U.S. manufacturers and other multinationals. Assessing how Mexico might fit into a company’s regional or global manufacturing strategy requires an approach that integrates considerations of cost, service, risk, and social responsibility. These factors vary by industry and company, and across different locales in Mexico. And as in the U.S., Mexican state and local governments may offer substantial incentives to locate or expand in their jurisdictions. Hence, it pays to ignore the myths, get the facts and do the analysis when it comes to manufacturing in Mexico.

Contact us to explore how we can support your strategic, operational, and investment needs: info@newharborllc.com